This is the first post in our new BizBlog where I plan to share some of our experiences, our failures and successes with building a WordPress SaaS business.

As the founder of CMS Commander and someone who has worked on various WordPress products for over 6 years now I think I will have quite a few useful lessons to talk about.

If you have never heard of CMS Commander before then this is also exactly part of the topic for this first post.

CMS Commander is a solution to manage multiple WordPress sites. It is a successful product but not the one everyone talks about. We are an underdog in what has become a very competitive WordPress plugin niche over the last few years.

In this article I want to take a look at how we struggled with the rising competition in a new market and the steps we took to finally improve our situation.

1. Realize Your Mistakes And Fix Them

CMS Commander started in 2011 and as such we were one of the early players in the manage multiple WordPress sites niche back when it just began growing.

Yet we still ended up as the underdog. How did that happen?

Part of the reason is that over the last years more and more players entered our market, many of which had bigger teams and a larger budget.

But maybe the more important part is that we made a wrong product design decision early on.

One of our first unique features for CMS Commander (and actually the core idea) was the ability to manage sites of several different content management systems (CMS) from a single account.

For our first beta we even built integrations for 4 different CMS: Joomla, Drupal, phpBB and of course WordPress sites could all be remotely controlled with our dashboard.

While that was something unique that did not exist yet and looked like a great idea on paper two major problems became apparent quickly after the beta started:

Once this mess became clear we had no choice but to cut our losses: After the public beta we decided to focus on WordPress sites exclusively and removed support for all other CMS from CMS Commander.

This was certainly a hard decision, since it meant giving up on a feature that took a lot of work to develop as well as disappointing the members that depended on it (even if that was only a small percentage).

In the end it proved to be the right direction however, as it allowed us to implement new WordPress management features much faster, focus our marketing and SEO efforts better and thus helped us catch up to the competition.

Of course even more desirable would have been to prevent the mistake entirely in the first place, but that might not always be possible for a small startup that lacks the time and money for extensive market research.

Trial and error is part of most WordPress startups. And that is fine, as long as you realize your errors and then act accordingly.

The lesson here is that you can’t be afraid to make painful changes to your product if necessary. Kill off features, change your message, shift your focus… whatever it takes to be competitive!

2. Learn From The Competition

If your product is the underdog chances are your competition is doing at least some things better than you are.

Because of that it is essential to watch the other products in your market closely and learn from what they do. Copy key features and try to improve on them.

With WordPress plugins you are often in a unique situation because you are even literally able to copy features from competing plugins.

The GPL license, which governs WordPress itself as well as all plugins and themes released for it, does grant a lot of freedoms that can help you catch up.

We were able to use those freedoms to our advantage early on with CMS Commander.

When CMS Commander got started it used the XML-RPC protocol to communicate with managed client sites. Later we learned that one of our main competitors, ManageWP, had come up with a better solution. Their client plugin used a custom solution with more secure SSL connections instead.

Because of the GPL we were able to and allowed to fork their code and incorporate it into our own client plugin.

Interestingly enough we were not the only one to do that: At least one other competitor copied the code by ManageWP too and did well (probably much better than we did) by entering the market with a different pricing model.

It is important to note that forking code or entire plugins like that is still a touchy subject in the WordPress community. While most people embrace the GPL for its freedoms there has ironically often been an outcry when companies use those freedoms to the full extent.

Most recently that happened when LeadPages forked the entirety of the Bloom plugin by Elegant Themes to create a new plugin of their own.

As I see it whether there is any outcry depends very much on the way a fork is done and for which purpose. In other words there is a right way to do it and there is a wrong way.

What generally causes a lot of #wpdrama are forks that lack any new innovations, seem like a big player bullying a smaller player and/or appear to be thinly veiled marketing tactics done for monetary purposes only. In the case of the LeadPages disaster all of those reasons apply.

What the WordPress community likes to see on the other hands are forks that cause innovation and are based on good communication with the original developers. An example here would be GiveWP, a fork of Easy Digital Downloads, which launched with little to no outcry.

And while all forks of GPL code/plugins are legal on paper this differentiation between ethical and unethical makes a lot of sense: “Good” forks are actually great for consumers, since they promote competition and hence result in more choices at lower prices.

Before I drift away from my main point even further what I think is this: WordPress businesses should know the implications of the license around WP products well, both of the advantages it can provide as well as the problems it can impose.

There is no shame in using the advantages the GPL provides for improving your business, as long as it is done in a legal and ethical manner.

The risks of GPL code are also what makes the software as a service model (SaaS) so attractive in the WordPress space on the other hand. In a community where all public code is supposed to be free running a SaaS gives you much more control over which code you release in the first place.

With ManageWP for example their whole management dashboard is “protected” and only the public client plugin could face scrutiny by competitors. This advantage might also be a reason most of Automattic ventures are SaaS products and I am sure we will see many more in the future.

Equally important to note: Simply copying what your competition is doing will not be enough.

To get noticed you also need to offer something that makes your product unique or better than “them”.

There are several ways to achieve that, including being better, being cheaper or being easier to use.

In WordPress new commercial plugins usually differentiate themselves from established players with one or several of the following points:

What helped us a lot with CMS Commander was to shift from a general focus to targeting one specific type of customer. Basically we refined our targeting to a subniche of the manage multiple sites market.

While some of our competitors were aiming for larger enterprise clients like universities or web design agencies we geared our own management solution towards independent web developers and small businesses.

We did that in three ways:

Implementing those changes together with constant improvements to our service helped us end a long phase of stagnation and accelerate our growth by a lot.

4. Focus On Improving Your Product

While the strategic considerations above are important I am convinced that improving your product is actually the best thing you can do to make your WordPress plugin a success.

The WordPress plugin niche is still small enough that people will find a high quality product with good support all by themselves, provided you make use of the WordPress.org directory and some other basic marketing channels.

Word of mouth is by far the strongest way to market a WordPress related product. From our experience with CMS Commander it beats everything else, including banner ads, Facebook ads, sponsored posts and so on. More on the stats with our many different attempts at marketing will follow in another post.

Over the last year we released 23 updates to CMS Commander, 10 of which were major new versions that added new features. We also redesigned our management dashboard twice to make it easier to use and more pleasant to look at. All those improvements paid off as the look at our results below will show.

People in the WordPress community are clever. From our users I know that many will do detailed research and test out several alternatives before choosing a solution. That means once you have a product that can stand up to the competition people will start to find you even if you do not have a big marketing budget.

All in all our results speak for themselves.

Despite all the wrong decisions of the past, despite not having any ingenious promotion successes, not having a big marketing budget or a huge team CMS Commander has enjoyed constant growth over the last years, in particular once we started our efforts listed above.

That growth certainly wasn’t explosive. It took a lot of work and followed a long time of stagnation where we struggled with the ever increasing competition.

Compared to some of the other products in the site management niche we are still a small player even now. CMS Commander stayed the underdog but it has grown up from a small puppy to a healthy dog. 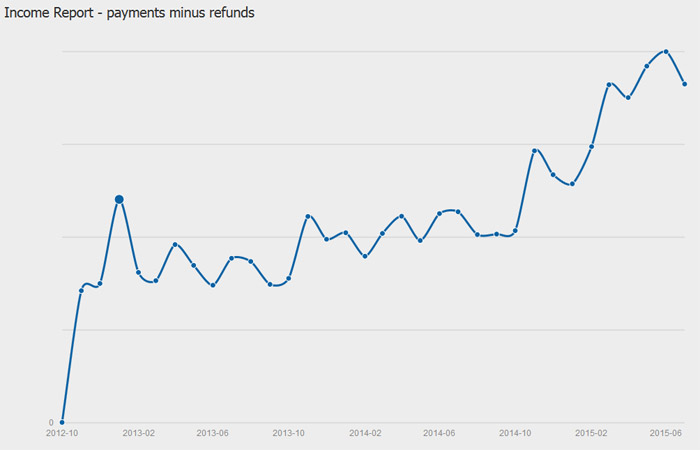 CMS Commander growth from 2012 to 2015: Early success thanks to existing customers, a struggle with long stagnation followed by rapid growth

Success is relative. I don’t want this to turn into one of those popular income reports and so the values of the graphic above have been removed. They would probably not blow you away anyways. But here are the reasons why we consider CMS Commander a success:

We are not the only example of course. There are plenty of other plugins which have entered seemingly crowded niches and had a lot of success. Some I have already mentioned above: WP Rocket for caching plugins, Ultimate Member as a new membership plugin and probably many more which did not share their stats publicly.

I believe what this shows is that the cake is big enough for new commercial WordPress plugins and solutions.

Due to our own experience I would be the last to say that the competition in many WordPress plugin niches is anything but tough. Still, the situation is much better than with WordPress themes, which many believe are on their way to become a low-priced commodity.

Even in niches where there are already several big established sellers there is still room for another player if you enter with a unique idea and bring enough dedication along for the ride.

Sign up now to start managing all your blogs immediately.
Completely free for 30 days. No payment details required!